skip to main | skip to sidebar

This cat doesn't pussyfoot around 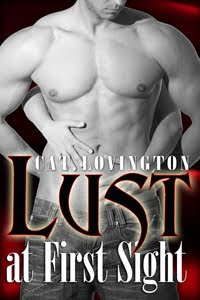 Hi All,
Just wanted to let you know that my new novella, Lust at First Sight, will be released on February 4th 2011.

Desperate for a knock-your-socks-off magazine article, freelance writer, Nonnie Lonigan, decides to impersonate a vampire in hopes of debunking the legendary sexual prowess of the night creatures. All bets are off when she meets, Dante, the tall, dark, and handsome vampire who runs a sophisticated Manhattan nightclub for vamps only. Sparks fly at first glance, igniting the flames of passion that leaves them breathless and vulnerable to a militia of hunters dedicated to slaying every vampire on earth.

The faint aroma of expensive men’s cologne floated on the air. She sniffed more than once, trying to grasp more of the masculine scent. If Dante looked even half as good as he smelled, things were looking up.

While waiting, she examined the oil paintings hanging on the wood-paneled walls that appeared to be thick and possibly soundproof. In case of emergency, even if she screamed for help, in all probability, no one would hear her. She snooped, stopping occasionally to admire the magnificent, ancient artwork. She assumed Dante was most likely getting on in years himself. He could quite possibly be hundreds of years old.

A small interior door opened with a whisper, and a tall, startlingly handsome man entered. He wore a white shirt, black trousers and a black dinner jacket. His dark hair brushed the back of his collar. But the eyes had it. They were an amazing shade of royal blue and seemed to glow from within. He didn’t look a day over thirty.

It didn’t happen often, but she felt the kind of tingle in her nervous system that usually indicated something important was about to happen. Aside from looking and smelling fantastic, the guy oozed sex appeal from every pore of his amazing body. Her libido kicked into gear, and the crotch of her black lace panties grew uncomfortably warm. No, warm wasn’t the proper word. If there were a heat-seeking missile within a hundred mile radius, she’d be toast.

Posted by Cat Lovington at 7:20 PM